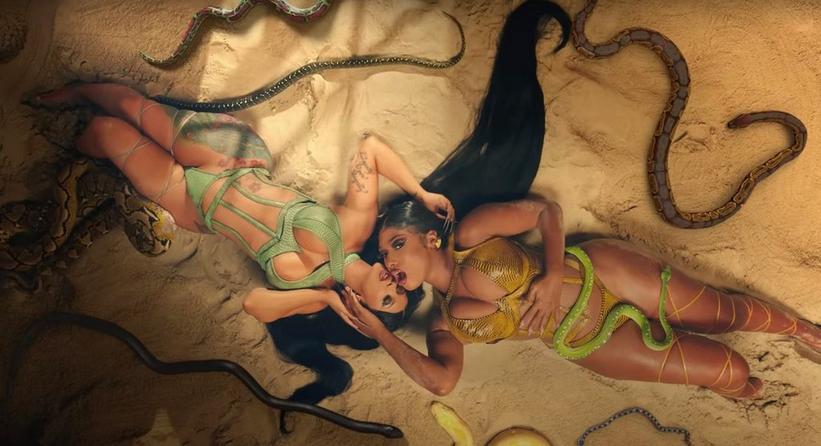 Cardi B and Megan Thee Stallion

The song is Cardi B's first collaboration with Megan Thee Stallion, and their sexually empowered lyrics leave nothing to the imagination

Cardi B has released her first song in nine months and has tapped in Megan Thee Stallion for the juiciest collaboration yet—pun intended.

"WAP" is a sexy song showing off how proud the "Money" rapper is of her vaginal lubrication. Short for "Wet A Psy," the song is Cardi B's first collaboration with Megan Thee Stallion—and their sexually empowered lyrics leave nothing to the imagination.

In the past, the rapper has expressed on social media how she feels judged for her sensual vocals, particularly when it comes to lyrics about her lady part.

Cardi B insists while some people may judge her for her lack of PG content, they like to listen to it: "There's different rappers that rap about those things that you all want to hear. There are conscious rappers. But you all not going to them. So you can't be mad."

"WAP" shows the rapper undoubtedly sticking to her guns. The just-as-sexy video, featuring both rappers walking around a house full of sensual decor in skin-tight, eye-catching outfits that serve non-stop curves, set out to not only celebrate sexual liberation but highlight female empowerment. To do so, the rapper invited special guests including Spanish singer Rosalia, who appears in a latex matador-inspired jumpsuit, and model/rapper/influencer Rubi Rose.

"I wanted a lot of different females, not just female rappers. I wanted different... A lot of different people," Cardi said about her vision. "And y'all going to see it on the music video as well, from models to influencers and everything. And I really wanted the video to be very sexy, very clean, very nice, very cut."

During her conversation with Apple, the Latinx artist said a months-long pause on music can be seen as a negative thing these days.

"When you put out music in nine months, people on social media will make you feel like you're doing something bad or you went away," Cardi B said.

The new song will be featured on her forthcoming album and follow-up to Invasion of Privacy. The rapper said she wanted to work on more music but the current times have her feeling a certain way.

"This whole fking Coronavirus, shit. It's just really fks with things and how you want to move. Like even when I had a song, it just, I was like, damn, like I don't want to put my next song with a fking Corona video in my backyard," she shared. "I want to fking be able to fking perform my song. Like that's what I want to do. I don't know when this shit happen."