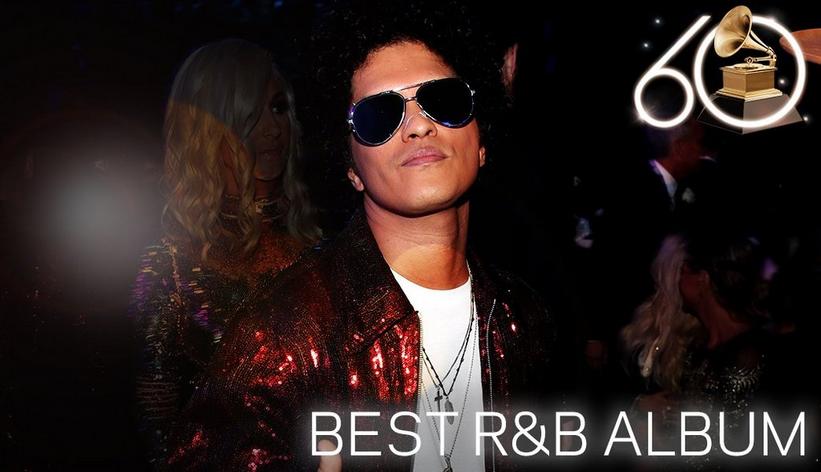 Bruno Mars at the 60th GRAMMY Awards is approaching the telecast having won three-for-three of the R&B categories that were presented at the preceding Premiere Ceremony. 24K Magic now has the GRAMMY Award for Best R&B Album.

While Mars went on to rack up nothing but wins this special night, it is worth some special reflection on the category Best R&B Album in light of his new place in it. In the course of our new century, its male winners have been D'Angelo and John Legend twice each, Babyface, Chris Brown, Robert Glasper, Maxwell, and Luther Vandross. For the women that list is Alicia Keys twice, India.Arie, Mary J. Blige, Toni Braxton, Lalah Hathaway, Jennifer Hudson, and Chaka Khan. For this year only, Bruno Mars has become so everywhere while being completely respected for his craft in every major aspect with the exception of the greatest guitar players of all time. But those lists of musical leaders go past R&B to the heart of music, go to a level that makes a person choke up on memories of tears and life and for the lucky, love as well. 24K Magic is now Mars' addition to a list that is not completely timeless because the GRAMMY voters selected them. These albums and artists are timeless, and that is why their names belong there.

In our oral history of Album Of The Year nominees, Bruno Mars said about 24K Magic that "it was the opening to a movie." He said he asked himself, "I am shooting a movie and I need the opening to let everybody know what time it is, what’s that going to sound like?" Well apparently in this category it sounds a little like Chaka Khan and a little like Luther Vandross. Mighty impressive company to be in.