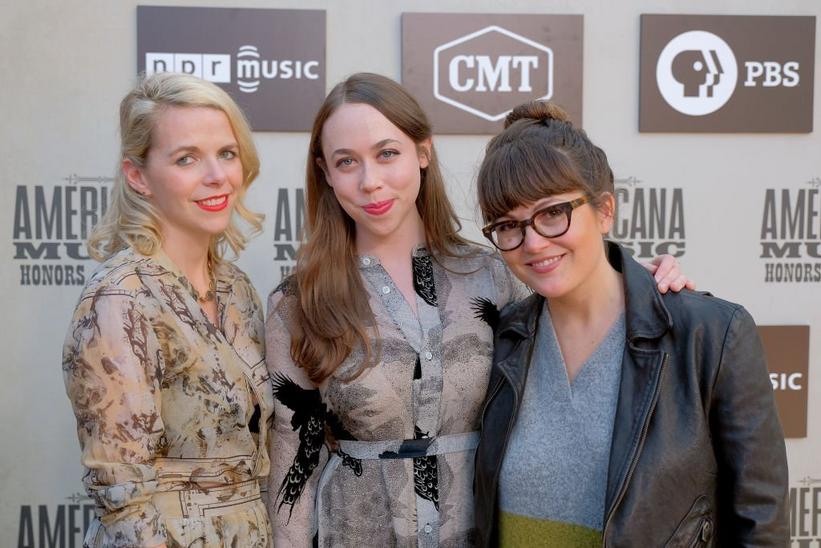 Sarah Jarosz, Aoife O'Donovan and Sara Watkins feel their trio's coming together was natural and organic, the way folk music should be

In the latest episode of the GRAMMY Museum's Required Listening podcast, Artistic Director Scott Goldman interviewed Sarah Jarosz, Aoife O'Donovan and Sara Watkins about their folk supergroup I'm With Her. The Americana trio's first album together, See You Around, was released in February 2018 to critical acclaim.

Listen Now: "Required Listening" With I'm With Her

At the 59th GRAMMY Awards, Jarosz took home two wins; for Best Folk Album for a solo release of her's, Undercurrent, as well as for Best American Roots Performance for the LP's track "House Of Mercy." Watkins' band Nickel Creek won Best Contemporary Folk Album for This Side at the 45th GRAMMY Awards. O'Donovan's singing with Crooked Still brought her widespread attention and a supportive community of fans, including fellow artists. As Goldman and the three women discuss in the episode, the collaborative creativity of the folk/Americana circuit of festivals meant they had been supportive friends long before collaboration became an organic next step.

The women didn't know what to expect when they began singing together, which was part of what made their collaboration fun and exciting. Responding to Watkins' observations about singing around a single microphone, Jarosz expands that they found it "sonically unifying as a young band to be able to be that close and figure out what our blend is, what our vibe is, how the different timbres of our voices go together." She continues, "Now I personally feel more comfortable on a multi-mic set-up having had the time put in with the one mic...It's so special and intimate and close that way."

Creative surprises born of togetherness also apply to their songwriting, and they cite the tracks "Game To Lose" and "I-89" as having snowballed after each began as just a groove. But all four discussed the unique context of the folk/Americana circuit as nurturing that kind of creativity. Watkins responded to a point made by O'Donovan that this even extends to their audiences. "I bet you 85 percent of the audience have guitars and sing songs with their friends," Watkins says. "They're relating to the bands on stage as people who speak the same language. It's that commonality and that appreciation."

Appreciating music in common extends to keeping entire albums on repeat during long car rides between venues. Jarosz cited Away Out On The Mountain by Tim O'Brien and the GRAMMY-winning Modern Vampires Of The City by Vampire Weekend, while O'Donovan made a touching confession about her soft spot for The Sound Of Music Soundtrack. "I just want to say for the record, sometimes you just have to go dig way back deep into your subliminal early influences and figure out what it is that makes you tick," she shared. "I think it's Christopher Plummer for me." For those too young to recognize the name, the actor portrayed the patriarch of the German Trapp Family Singers in the film also starring Julie Andrews.

I'm With Her is currently on tour across North America, creatively connecting their fresh Americana to the genre's deep folk roots.