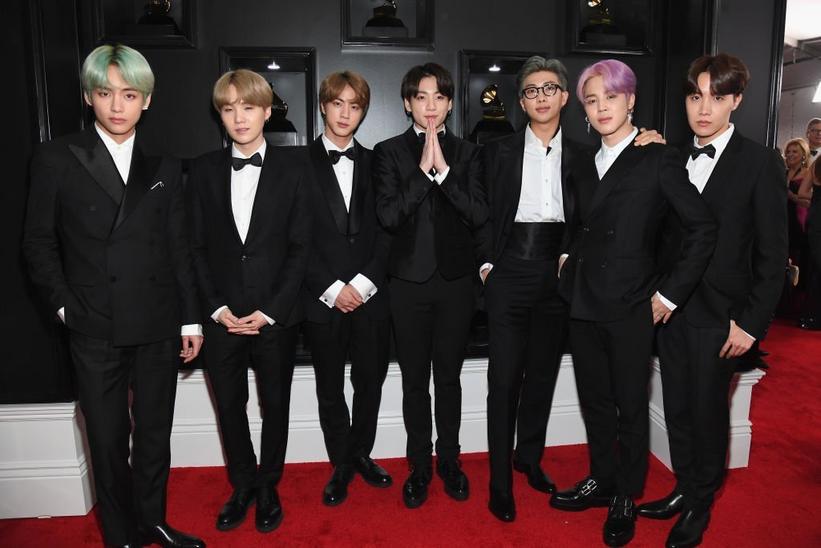 All The Ways BTS Won Our Hearts At The 2019 GRAMMYs

From hinting at new music to dancing in the audience to presenting their first award, everyone's favorite K-pop septet lived it up at their first-ever GRAMMY Awards

The seven members of K-pop phenomenon BTS—J-Hope, Jin, V, Jungkook, Jimin, Suga and RM—were clearly as excited as their fans were for their first appearance at the 61st GRAMMY Awards. From arriving in style to dancing in their seats to more firsts as they took the stage, let's countdown the top five ways the boys of BTS stole the show—and our hearts.

The South Korean group always has a strong style game, but their understated pizazz in matching black-and-white tuxedos really elevated their look on their first GRAMMYs red carpet. Their excitement to be a part of Music's Biggest Night was palpable as they exited the SUV, posed for their first photos of the evening and made their way to the carpet.

Once they were on the carpet, the Recording Academy shared a special moment with the boys by asking few burning questions. When we asked when we could expect a new album, they teased with just enough info to get fans buzzing.

When asked if it would be a collab album, RM gave a coy answer, while Jimin looked straight into the camera and said: "There could be a collaboration song and some joint songs, we don't know, we're working on it."

They also shared their excitement about seeing H.E.R., Lady Gaga and Travis Scott perform at the GRAMMYs. (Back in September, during their visit to the GRAMMY Museum, BTS shared that they'd been listening to a lot of Scott's "Sicko Mode," so the boys were definitely ready to dance.)

More BTS: "Fans Gave Us The Wings That Allowed Us To Be Where We Are"

In addition to being ready to watch some of their favorite U.S.-based artists live for the first time, BTS name-dropped H.E.R., Scott and Gaga all as their dream collaborators. As they told Variety in another playful red carpet interview, they would love to work with the aforementioned artists, along with Camila Cabello.

Jungkook feeling himself while singing to Dolly Parton song is a big mood. @BTS_twt pic.twitter.com/Ri0mV7sCXI

The boys seemed to be having the most fun of pretty much everyone when Dolly Parton took the stage for a big medley with some very special guests to celebrate her being the 2019 MusiCares Person Of The Year. As the cameras cut to the audience during Parton and goddaughter Miley Cyrus' "Jolene" duet, BTS could be seen dancing and singing along enthusiastically. Clearly anyone sitting near them had the best seats in the house, and the BTS army was quick to make the joyful moment viral.

Related: BTS On The Creative Process, Breaking Records, Their Responsibility As Artists & More

1. Becoming The First K-Pop Group To Present A GRAMMY

In addition to having a blast at their first GRAMMYs, the boys made history as the first K-pop group to present an award in the show's 61 years. They took the stage at STAPLES Center for the first time to present H.E.R.—one of the artist's they were stoked to see—with Best R&B Album.

As they told Variety on the carpet, it was their first time ever presenting an award, so it was quite a monumental day of highs and big firsts for the boys.