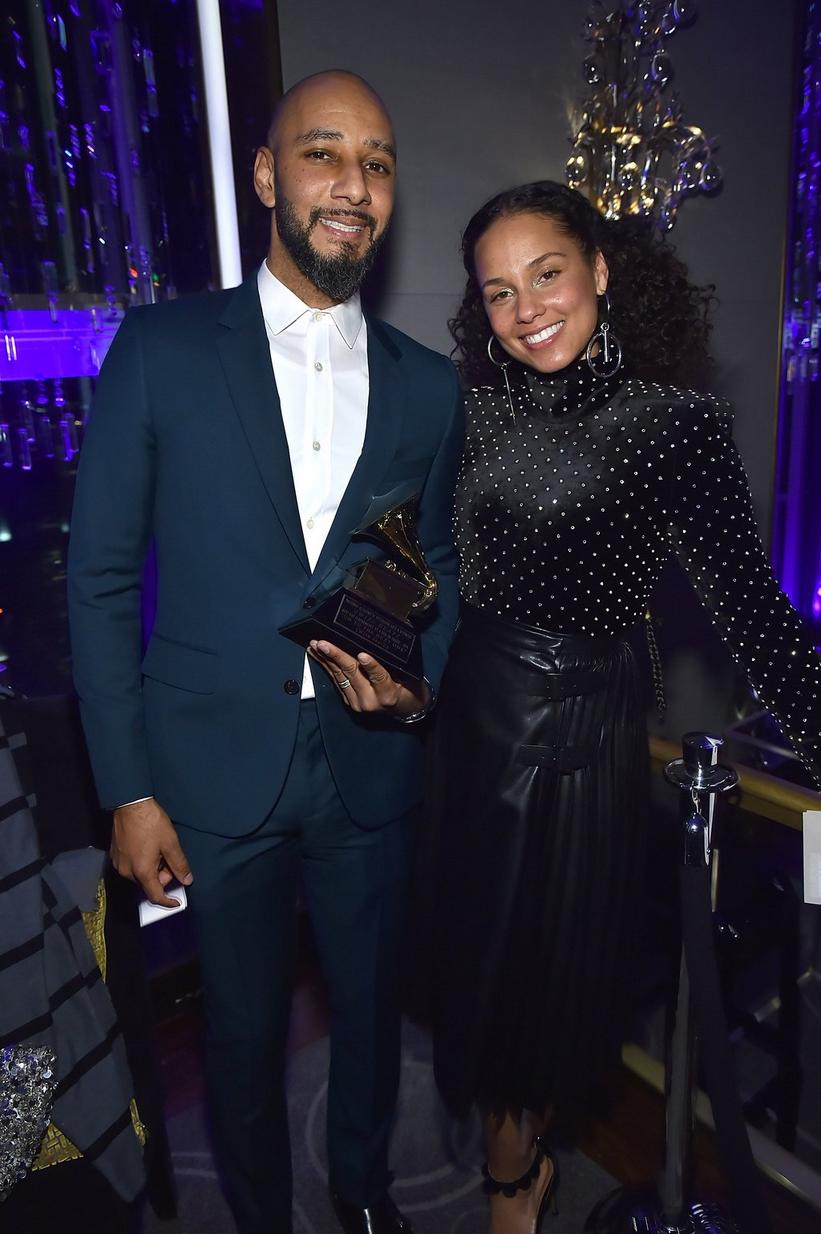 Held at the iconic Rainbow Room, perched 65 floors above the landmark Rockefeller Center, the exclusive, invite-only event brought together the community of recording studio professionals in a new way this year. The room was filled with industry titans, such as GRAMMY winners Peter Asher, Ed Cherney, Tony Visconti, and Chick Corea, and current GRAMMY nominees Morgan Heritage and Lisa Loeb — all of whom came out to celebrate their craft and honor Keys and Dean.

Upon arrival, the couple was greeted on the red carpet with the first of several spontaneous group singings of "Happy Birthday," meant for Keys, who coincidentally received this honor on her birthday. And the excitement of the evening was two-fold for the birthday girl in light of being honored side-by-side with her husband.

"The coolest thing, I think, for [The Producers & Engineers Wing] to honor both of us is that we do very different music," said Keys. "There is no limit to the music, and how it can be created and how it touches people, and to celebrate … our different styles, that's what I love the most because music doesn't just happen in one way. Everyone in that room does music differently, and we're all dope for it."

A 15-time GRAMMY winner, Keys exemplifies versatility, making her mark in the music world as a singer/songwriter and producer, as well as an actress, author, activist, and philanthropist. Since the 2001 release of her debut album, Songs In A Minor, Keys has sold more than 30 million albums worldwide.

However, her impact on music and culture reaches far beyond sales tallies. The New York native's message of female empowerment and her authentic songwriting process have made her an inspiration for women and aspiring creatives worldwide.

"There's a ton of things I'm passionate about," said Keys, "and to continue to share our experience and go deeper into how we can collectively create powerful change is definitely a focus for me.

Swizz Beatz has helmed countless big records dating all the way back to 1998 when he produced his first hit, DMX's "Ruff Ryders' Anthem." In his career spanning more than two decades, he's worked in multiple genres with artists such as Jay-Z, Madonna, Kanye West, and Metallica.

"He helped paint the picture for hip-hop as it is today," said GRAMMY-winning producer and current GRAMMY nominee Jimmy Douglass.

His deep influence on modern hip-hop aside, Swizz Beatz went on to graduate from Harvard Business School's Owner/President program and has built a legacy and a body of work that cannot be contained by the recording studio walls. He entered into a joint venture with Clive Davis at age 23. He's since gone on to launch successful ventures into fashion design, fine art, and philanthropy on his way to becoming a renowned cultural ambassador and natural born modern-day Renaissance man.

"This is a major honor, this is a blessing to see so many creative people in one room," Swizz Beatz said as the couple took the stage. "I never would have expected to be on this stage, especially next to this shining bright star. It shows you that hard work doesn't go unnoticed.

Dean added, "The sky is not the limit, it's just the view," and the room whipped into a frenzy.

Following the couple's acceptance speech, a special guest was called to the stage to pay tribute to the honorees: GRAMMY-winning jazz-fusion pioneer Chick Corea.

"Everyone in that room does music differently, and we're all dope for it." — Alicia Keys

"Swizz and Alicia are living works of art, so this is dedicated to them," Corea announced before leading the room in a sing-a-long rendition of "Spain," as requested by Keys herself.

Then the jam ensued. Corea called Keys and Dean back to the stage to play, sans rehearsal. They broke into an impromptu version of "Summertime," with Keys trading soulful vocal runs with Corea's mind-bending piano licks, followed by an improvised jam that featured Swizz on beatbox, Corea weaving the keys through his rhythms, and Keys leading an audience down-home call-and-response.

It's safe to say this night was special, not only for the stars of the show but for the community of hard-working producers and engineers the Recording Academy — and the P&E Wing — support and represent.