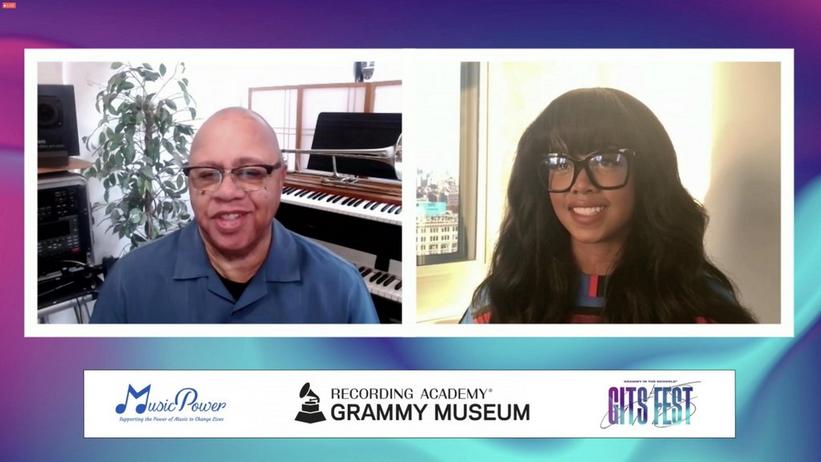 5 Key Quotes From GRAMMY In The Schools Fest 2021

In an effort to support students in their college and professional careers, the GRAMMY Museum hosted an online festival featuring expert advice from music industry professionals

A year of remote learning continued this week for students across the country who aspire to become professionals in the music industry someday. As millions of students remain at home and out of classrooms, the GRAMMY Museum’s first annual GRAMMY In The Schools Fest offered students at home a rare opportunity to obtain knowledge and insider insights straight from the minds of renowned music educators and performers.

The online fest, presented by MusicPower with additional support from the Ford Motor Company Fund and Zildjian, took place between March 8-11 and featured 20 informational sessions, including virtual Q&A’s and panels. The sessions featured GRAMMY winner H.E.R. and GRAMMY nominees HAIM and Hunter Hayes, among others.

Watch highlights from the launch of our four-day virtual festival, #GITSFest!

"We're confident the skills you learn here today will make you both college and career ready," offered GRAMMY Museum President, Michael Sticka, at the top of each segment. While many sessions offered a behind-the-scenes look at the more technical aspects of music-making, there were plenty of personal anecdotes and words of wisdom dispersed throughout the four afternoons.

Unsurprisingly, COVID-19’s impact resonated throughout presentations, as music teachers shared videos depicting what it was like to create art with young people in the new normal (choral practice looked a lot different this year). Similarly, artists were quick to discuss how the conditions of the pandemic had a marked influence on the types of songs and music videos they produced, as well as how it shaped their method for connecting with fans who were also rocking that quarantine life.

This year once again proved that music is a powerful form of therapy, self-expression and a source of motivation for many—In total, more than 120,000 students registered for the fest. Here are five key quotes from GRAMMY In The Schools Fest that speak to the resilience of innovation of creators and how music is a vehicle that carries us through the defining moments of our lives.

"You sing to inspire, not to impress."

Dr. Jeffery Redding had his work cut out for him in 2020. The 2019 GRAMMY Music Educator Award recipient assumed the role of Director of Choral Activities at University of Central Florida last fall, landing him with the difficult task of safely instructing vocalists during a global pandemic. With masks and socially-distanced outdoor practices a part of the norm, he now instructs his pupils to focus on pronunciation, articulating consonants and more—something that can be difficult to achieve with face coverings. During his 45-minute discussion with David Sears, Vice President of Education of GRAMMY In The Schools at the GRAMMY Museum, he was asked what an aspiring vocalist should do in preparation to become a professional performer. His advice was simple: “It’s not about you. It’s so much larger than you. You sing to inspire, not to impress.” When we take the focus away from ourselves and place it into the art, he believes, is when the real magic happens.

"It was never about mastering an instrument to me. It's knowing it enough to speak with it."

If that’s the case, then country singer and producer, Hunter Hayes, is multilingual. The 2012 Best New Artist nominee was given an accordion at just two years old, and it was during his adolescence that he discovered drums. He eventually gravitated toward piano and guitar, two instruments he now uses as a foundation when experimenting with sounds and penning GRAMMY award-nominated collections like his 2012 self-titled album. When chatting with GRAMMY Museum project manager, Julie Mutnansky, a question from the audience inquired: "What advice would you give to someone picking up an instrument for the first time?" "Just go," he responded. "If your passion is technique, I support you, but don’t let technique get in the way of passion and don’t let perfection get in the way of creativity or just expression."

"PLAN B is going to be another way to make PLAN A work."

H.E.R. was signed to her first label when she was only 14 years old. Born into a musical family, she always knew the groove would be an important part of her life, but that didn’t stop her from creating a Plan B; Her alternate choices were teacher, a construction worker or a nurse). Lucky for us, the talented singer-songwriter-instrumentalist decided to commit 100 percent of herself to her craft. "Plan B is going to be another way to make Plan A work," H.E.R. said. "With or without the money I was going to do music. And my father always said, 'If you don’t love it without the money, you’re not going to love it with it.'"

Focus, drive, and a strong support network have helped the young artist amass a stunning 20 GRAMMY nominations. At the 2021 GRAMMY Awards,  she won Song of the Year for her track "I Can’t Breathe" which she wrote at her mother’s house following the untimely death of George Floyd. She also shared how being a woman in music has been an uphill battle too, as she was originally advised not to play instruments on stage, and she received pushback for not wanting to feature her face on the album cover when the project dropped. But both of these elements are so core to the H.E.R. concept—"having everything revealed" through music.

"It's not what you're working on. It's who's pressing the buttons."

GRAMMY-winning audio engineer Derek "MixedbyAli" Ali has worked with a multitude of hip-hop greats throughout his career, among them Kendrick Lamar and Dr. Dre, who imparted the above wisdom to him during a mixing session. During his chat with David Sears, a viewer asked, "What is the best DAW (Digital Audio Workstation) app for first-timers?” In response, Ali insisted it’s less about the software and more about one’s commitment to the hard work. "You’re the sound, not the equipment," he reiterated. "Be a master of the tools you currently have. Don’t spend a bag on all this new equipment if you don't know how to use it."

"The whole mantra of this record was, 'Make something. Put it out.'"

The HAIM sisters were asleep when they received the call informing them that Women In Music Part III was nominated in the Album Of The Year category. Their buoyant single "The Steps" also snagged a nod for Best Rock Performance. But they insist the exciting news all came as a massive surprise. The LA-based band mastered the art of flexibility this year, from working on tracks remotely to filming a rogue music video for their hit "Summer Girl" with Academy Award-winning director, Paul Thomas Anderson. "We didn’t even have a permit," Este chimed in with a shrug. Instead of getting too caught up in the moment, they worked with what they could and kept things simple. Instead of sitting on songs and waiting to release them in a post-pandemic world, they put it all out there. As it turns out, this was the best move they could have made. It’s also a lesson for young people to heed—get out of your way and share your art with the world.

Ready to put this professional advice to good use? Download free lesson plans  from the GRAMMY Museum’s official website.