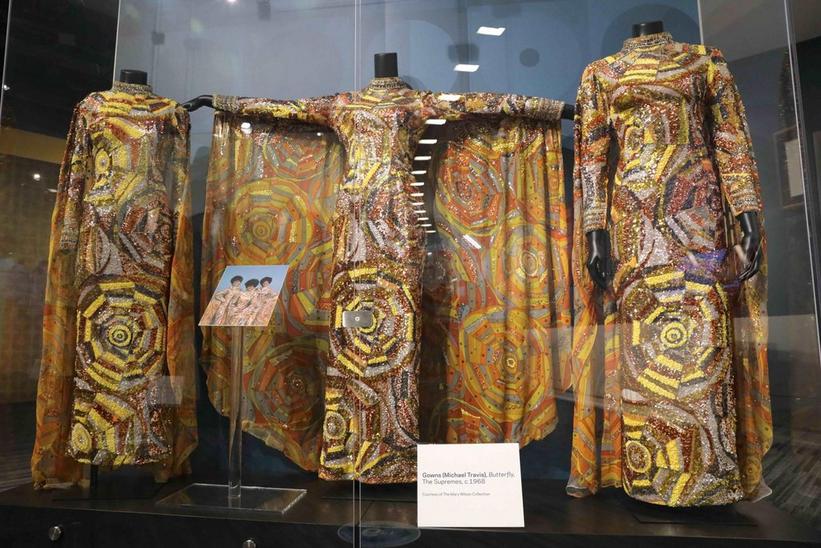 The Supremes' gowns at GRAMMY Museum

7 Fun Things To Do "With" Marco Antonio Solís, Dave Matthews Band & The Supremes At The Newly Reopened GRAMMY Museum

Today, May 21, the GRAMMY Museum in Downtown Los Angeles officially reopens its doors to the public! It is most definitely worth a visit for music lovers of all stripes, as it offers fun and engaging content for all ages.

Additionally, there are new GRAMMYs looks on display and tons of interactive displays on genres, the GRAMMYs and more. While to best way to experience all the GRAMMY Museum has to offer is to see it for yourself, GRAMMY.com has explored it in advance so you know what to expect. Read on for five must-see (and do!) things currently on display at the GRAMMY Museum.

Sing With The Supremes…

The impact of Motown and its founder Berry Gordy Jr. on music and culture to this day is undeniable, and is on full, colorful display on the second floor of the Museum. Amongst the fly outfits and other artifacts from Motown artists (including Stevie Wonder's keyboard and harmonica) across the decades, you can join Diana Ross and The Supremes to belt their 1965 classic, "Stop! In The Name Of Love." Don't worry, a screen with the lyrics is there to help.

Another interactive experience at the exhibit dedicated to "the sound of young America" teaches you The Temptations walk, so you can move with style for the rest of your days. Tap the screen to get your dance moves in check, in front of sublime yellow suits worn by the legendary band.

The massive Marco Antonio Solís exhibit has many, many gems and stretches across the third floor, dedicated to the Latin GRAMMY Awards and the breadth of Latin music. The bilingual experience takes you into five chapters of the superstar's life, including his roots in Michoacán, Mexico, and his time with Los Bukis (which means little kids in the indigenous Purépecha language of Michoacán!).

It's impossible to not be stunned by his countless gold and platinum records from around the world on display or to feel the incredible amount of lives he's touched with his music when learning about his relationship with his fans. In the section dedicated to his fans, you'll multiple gifts given to him by the devoted over the years and learn about the many fan clubs dedicated to him.

You can admire the adorable Los Bukis fan club jacket and banner from '90s Club Quiéreme, although, unfortunately, you can't take it home with you. Back in the early '00s, before Facebook groups and Zoom calls, MAS clubs like that would hold international conventions in Mexico. ¡Que amor!

Walk On The GRAMMYs Red Carpet

After leaving the warm embrace of Solís and his many admirers, you'll get a chance to walk the red carpet and learn more about the history of the GRAMMY Awards. While serving your best paparazzi poses, you can check out the latest GRAMMY looks on display, including three from the 2021 GRAMMY Awards show: one of HAIM's periwinkle Prada numbers, Lionel Richie's long black coat and Harry Styles' black leather Gucci suit and lively green boa. You'll also witness stunners from the 2019 GRAMMY Awards show, Jennifer Lopez's black sequin Michael Costello gown, the late Nipsey Hussle's fly 5001 Flavors black tux and velvet loafers and Michelle Obama's eye-catching Sachin & Babi sequin suit, among other past shows.

On the fourth floor, you'll get a look into the late GRAMMY-winning crooner Nat King Cole's life, music and "Unforgettable" legacy. It's a rare look into his touching personal life, as very little has been exhibited on it, despite his icon status. "This Is Nat King Cole" explores the lasting global impact of his music and the barriers he broke as a Black performer and civil rights activist during segregated America.

It also offers a touching portrait of his devotion to his wife and daughter, nine-time GRAMMY winner Natalie Cole, who continues his legacy of love-filled music. Visitors can feel the love for themselves while reading touching telegrams and letters Cole sent to his wife while touring around the world.

Go On The Road With Dave Matthews Band

Around the corner from Cole, dive deep into 30 years of the beloved Dave Matthews Band, all the way back to their humble beginnings playing fraternity parties and local venues in Charlottesville, Virginia. The GRAMMY-winning jam band's exhibit honors their energetic, ever-evolving live shows and the many diehard fans that won't ever miss a chance to see them.

Must-see artifacts on display include setlists from their shows across the years, including a 2007 one that is also a running list of every song they had already played that year—their way of ensuring they never play the same show twice. The exhibit also celebrates the DMB fans, and their love for sharing videos—which the band encourages—and setlists with fellow fans.

You can also watch several exclusive video interviews with frontman Dave Matthews on the band's beginning, their live shows, his love of The Beatles and more.

Explore The Roots & Intersectionality Of Genres

The permanent exhibit on the fourth floor alone is worth several hours of education and entertainment, with multiple interactive spaces that explore the roots and branches of genres, musical meccas and innovative musicians. A large touch screen "table" allows you to find the connections between endless subgenres, like techno and Tejano, and hear examples of each.

Book your tickets to the GRAMMY Museum here.