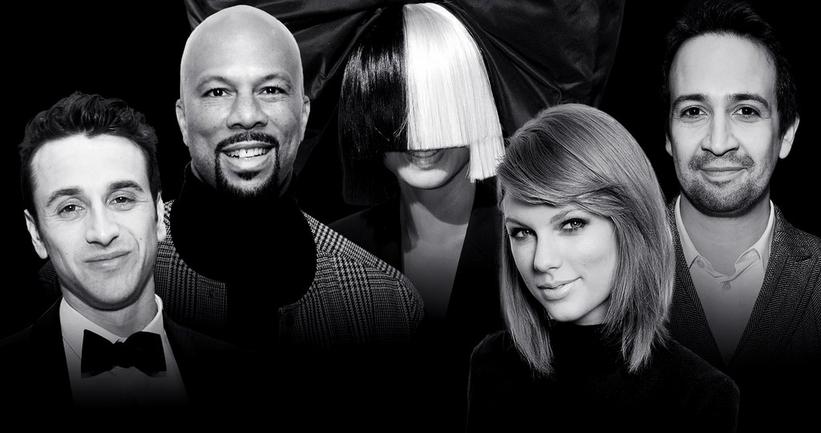 While films are no doubt all about the visuals, there's no denying the power of music in cinema.

Sometimes, the perfect song can punctuate a film scene perfectly, or, if the composer's lucky, result in an iconic Hollywood moment. Think Audrey Hepburn crooning "Moon River" in Breakfast At Tiffany's or John Travolta's strut to the tune of "Stayin' Alive" in Saturday Night Fever, just to name a couple.

The five nominees for Best Song Written For Visual Media for the 60th GRAMMY Awards are all songs written for the silver screen. Each offers a modern example of a vital auditory companion to a film. In other words, when you sing along, you can probably picture the movie instantly.

Have a closer listen to this year's nominated songs and learn more about the songwriters behind them.

(Editor's Note: Best Song Written For Visual Media is awarded to the songwriters of a song written specifically for a motion picture, television, video game or other visual media. Artist names appear in parentheses.)

The affable tune, which impeccably bottles the tone of the film, forms the basis of multiple scenes, including when Sebastian (Gosling) sings and dances on the Hermosa Beach pier. "['City Of Stars'] started at the piano with me just working on demos," said co-writer Justin Hurwitz. "I would say the tone is hopeful, but melancholy at the same time."

This nod is one of four La La Land-related nominations for Hurwitz. His collaborators Benj Pasek and Justin Paul are each up for Best Musical Theater Album for Dear Evan Hansen. All three are seeking their first GRAMMY win. Should "City Of Stars" prevail, it would become the latest in a lineage of songs to win both a GRAMMY and an Oscar.

Lin-Manuel Miranda is seeking his third taste of GRAMMY gold with this song from the hit Disney animated motion picture, Moana. With its "I can do it" theme, the platinum tune, performed by actress/singer Auli'i Cravalho (Moana), was in the running for Best Original Song at the 2017 Oscars, but ending up losing to fellow nominee "City Of Stars."

As it turns out, Miranda employed a form of "acting" to compose the uplifting song. The GRAMMY winner returned to his parents' home and actually locked himself in his childhood bedroom in a bid to get in the creative mindset of a 16-year-old, the same age of the main character, Moana. "I kind of went method for it," said Miranda. "I like, locked myself up in my bedroom and it was like, 'All right, you're 16 years old.'"

Miranda is also up for Best Compilation Soundtrack For Visual Media for his co-producer role on the soundtrack to Moana: The Songs. He has two prior wins for Best Musical Theater Album for In The Heights and Hamilton.

Ripe with sexy falsettos and mesmerizing instrumentation, "I Don't Wanna Live Forever" is arguably as electric as the steamy film itself. The combustible chemistry of the unlikely pairing of Taylor Swift and ZAYN make for the perfect aural backdrop to Fifty Shades Darker's sailing scene between Anastasia Steele (Dakota Johnson) and billionaire Christian Grey (Jamie Dornan). And upon its release, the song sailed all the way to No. 2 on the Billboard Hot 100.

Not bad for a song that "came together very quickly," according to Jack Antonoff, who also revealed via Twitter that it was produced "at home mostly on paper sounds."

i don't wanna live forever came together very quickly. wrote it with taylor and sam dew and produced it at home mostly on paper sounds

The 10-time GRAMMY winner Swift is a past winner in the category, earning the honor for "Safe And Sound (From The Hunger Games)" at the 55th GRAMMY Awards. She is up for another songwriter award this year, Best Country Song, for writing Little Big Town's "Better Man."

Anotnoff, a three-time past winner, is also up for Album Of The Year for his production and songwriting roles on Lorde's Melodrama. Sam Dew is a first-time nominee.

One of the more authentic film anthems in recent memory, "Never Give Up" is the product of Sia and her frequent collaborator, producer/songwriter Greg Kurstin.

Featured in Lion, starring Dev Patel and Nicole Kidman, the music in "Never Give Up" perfectly matches the film's storyline about a young Indian boy who searches for his Indian birth family 25 years after being adopted by Australians. The song's message mixes an inspirational message on top of Bollywood-style music flourishes, with Sia declaring, "I won't let you get me down/I'll keep getting up when I hit the ground/Oh, never give up, no."

Sia, who was nominated in this category last year for "Try Everything" from Zootopia, is in search of her first GRAMMY win. Four-time GRAMMY winner Kurstin is also nominated for Producer Of The Year, Non-Classical, which he won last year.

"Stand Up For Something"

"It could have taken place in the '60s or '70s, but it's relevant to today," Common told "Good Morning America" about Marshall. "Unfortunately, we have to encounter these issues, but we have to take them head-on. … We've got to stand up for whatever it may be, whether it's animal rights, the environment, women's rights, and standing up against the injustices."